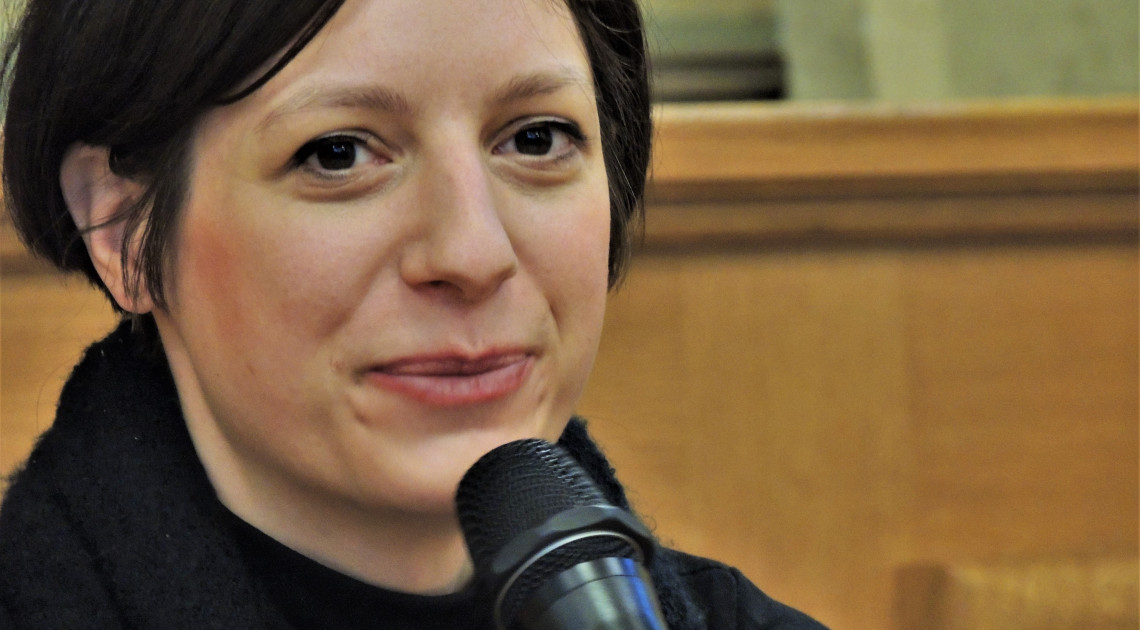 Back to School: Lea Sauer meets students in Pécs

Lea Sauer, who has been a guest of the Pécs Residence of the Petőfi Literary Fund’s residency program in September and October 2020, visited the Lajos Nagy High School of the Cistercian Order in a manner that could be characterized as, well, traditional.

As she had on several earlier occasions, instructor Zsuzsanna Boda invited curious twelfth-graders who know German well and have an affinity for literature to attend the talk. Unfortunately, the current pandemic also spoke up, as it were, as one group was placed in official quarantine, leaving only about 20 students able to attend the class on Friday, which was held in the high school’s assembly hall.

Sauer first read aloud from the publication which appeared as part of the PestText festival (in which she was one of the participants), and she then spoke about the stages she went through in the process of becoming a writer. She noted that she came from a family in which manual labor enjoyed more respect than reading and, in particular, writing, which meant that her parents were not initially wildly enthusiastic about her “hobby.” This was one of the reasons why she strove to break free of this environment as soon as possible and went to Finland for a year as a high school student and then spent a longer time in Paris, a decision she made in part because, in the meantime, she had completed her degree in French. Sauer, who currently lives in Leipzig, published her first work comparatively late, at the age of 28, but it enjoyed immediate success. She mainly writes prose and radio plays, and she touches on topics such as domestic violence, social tensions, and conflicts between the rich and the poor.

Sauer is currently working on her first novel, work in which she has been engaged over the past few weeks in Pécs. She has found the city, of which she had never heard before, quite enchanting, not simply because of its spectacular architecture and rich cultural life, but also because it is bustling with young people and is home to such an international community. She noted that when she sits down in a café, she is always pleasantly surprised to hear the colorful array of different languages being used around her.

At the request of the students, Sauer also said a few words about the kinds of books that are popular among young readers in Germany nowadays and the contemporary authors who manage to capture their interests (Lucia Berlin, for instance). She also noted that, after she has returned to Germany, she will undoubtedly write about her experiences in Pécs and in Hungary.