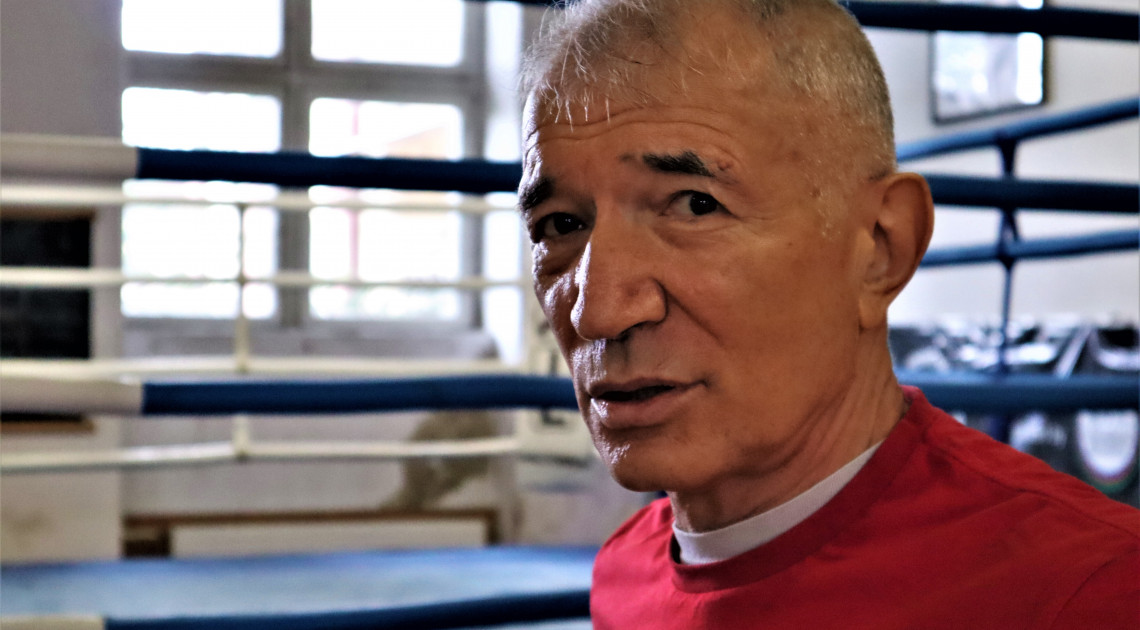 I didn’t actually check to see if there has ever been a boxer who was also a poet, or rather a poet who was also a boxer, but now the theater of world literature definitely welcomes one such poet-boxer onto its stage.

Bulgarian poet and boxer Palmi Ranchev will be the first guest of the Petőfi Literary Fund's Writers’ Residence Program in Pécs. He cheerfully managed to do a whole day of media events in the heat of August.

Ranchev, who has only had a few short stories published in Hungarian translation, is a star in his homeland. In 2019, he won the Book of the Year award. But if you have not yet encountered his writings, his name may still sound familiar, as he was once a prominent boxer and then, until the end of the Rio Olympics (2016), he was the head coach of the Bulgarian national boxing team.

Well, then it’s simple, one might say. Though it is not simple at all.

He came to Hungary as a writer, of course, yet the day began in PVSK’s boxing hall on Verseny Street in Pécs. I didn’t see the faces of the leaders of the local wrestling clubs, Gyula Alvics and Zoltán Borovics, when I asked them on the phone if they wanted to come meet this poet-boxer, but they must have been very enthusiastic, as they were waiting for Ranchev. He brought his own clothes for the ring, and in a few minutes, he had changed and was warming up on punching bags and then going up against “opponents” who had been brought in for his sake, József Pesti, who was once on the Hungarian national team, and Balázs Borovics, who is seen as the hope for the future. Ranchev seemed very much at home. And why not? But he gave witty answers to reporter Zsuzsa Völgyi Tóth’s questions, commenting for instance that boxing and literature are not really all that different. The essence of both activities is some kind of contact, in one case against an opponent in the ring, in the other, with the reader.

We were also lucky to have Ranchev as our guest because as a professional athlete and a coach and team captain, he knows how to deal with the media and he knows what it means to make a film. He was patient and understanding, and in the end, everyone played his or her part, the interpreter, director of photography, sound engineer, reporter, and, of course, the boxer and poet.

He then took a shower and emerged as a literary figure. We went to Széchenyi Square, and while he was sipping another coffee (as a dedicated professional, he does not eat meat or drink alcohol, coffee is his only weakness…), Edit Gilbert, a literary translator and teacher whom he had already met during his previous stay, and Tamás P. Horváth, one of the iconic figures of cultural life in Pécs (he is the author of a recently published trilogy about the Zsolnay family). We chatted, and he could talk about pretty much anything, the three months of quarantine through which he had lived (he currently lives in Barcelona), the challenges of earning a living as a writer, and of course boxing, even though we don’t really know much about it. He told us, for instance, about how he once met Hungarian boxing legend Laci Papp, who was something of a god to him. He had noticed how small Papp’s hands were, and he had wondered for a long time how anyone with such small hands could land such devastating blows.

We then left the main square and went to Tettye, one of the loveliest parts of the city of Pécs. The late Dervish Monastery made quite an impression on Ranchev, and he took lots of pictures using his smartphone (we only later noticed that he was posting about the events on Facebook). We also showed him Sándor Rétfalvi’s famous statue of Christ. He agilely popped out of the car, leapt over the fence, and then took two or three steps up the hill, then roughly the same on the way down. So he’s not quite the usual coffeehouse poet.

The last stop on our trip was the writer’s residence in Felsőmalom Street, which has been a home to authors in residence since 2007. This part of the profile film resembled a traditional interview with a writer. We were in the poet’s dwelling with an open laptop as a backdrop. As it later turned out, Ranchev only writes poems using pen and paper, as he proved by showing us a sheet of paper that was covered with scribblings. It was work he had done after having arrived in Pécs, after having been struck by the sight of someone in the city who had been wearing a red shirt and mumbling, and the spectacle had given Ranchev the inspiration for a cycle of poems, “Pécs verses.”

By about 4 o’clock, we were all beginning to get a bit weary, but our poet, as a great athlete, knew that the game wasn’t over until, well, until we bid farewell and give him some time on his own to relax. Perhaps to give us the perfect final shot, he marched back and forth a few times in the hallway in front of the apartment and then went in and began to write. The camera caught it all.

When we bid him farewell, he may have loosened up a little, retired to his dwelling, and finally gotten some lunch…